On 28 June, more than 175 people gathered at Bozar in Brussels to celebrate 30 years of the Evens Foundation.

Photographers Monday Agbonzee Junior and Dries Luyten were there to capture the whole day, and we are happy to share the results from the wonderful and memorable event! The photos can be viewed in the slideshow below or on our Flickr page here.

Read on for a full recap of the day. 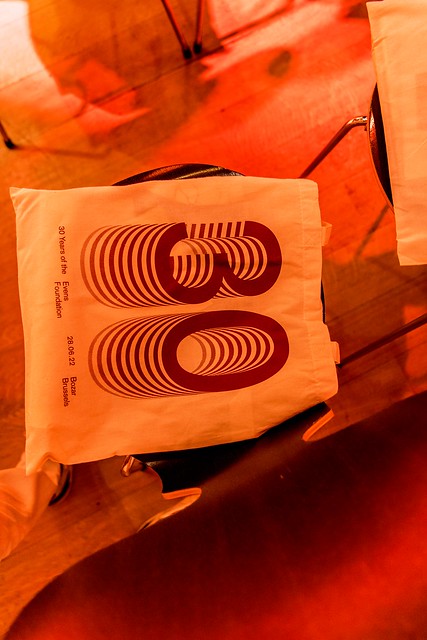 The event kicked off with an introduction from the host, Bahram Sadeghi, followed by a short conversation with the Evens family – the foundation's co-founder Corinne Evens and the next generation represented by Déborah Flon and Jonathan Evens.

Corinne shared moving memories from the foundation's past, while Deborah and Jonathan talked about their concerns for the future of the planet and society – particularly the environmental crisis and the shifting digital realities that are increasingly shaping how we behave in the 'real' world.

A lively panel discussion about European values followed, moderated by Juli Simond of Are We Europe, with guests Carina Lopes (Digital Future Society), Maciej Nowicki (Helsinki Foundation for Human Rights & WATCH DOCS International Film Festival), Steven Stegers (EuroClio), and Maïté de Haan (Troebel vzw). The discussion was linked to our recent podcast series The Seventh Value, and audience members were invited to nominate their 'seventh value' for Europe, either by voting on the values proposed by the panellists or by submitting their own proposal on a card.

This session was followed with an interactive dance workshop, conceived by choreographer Seppe Baeyens and Atelier Leon, with percussionist Saif Al-Quaissy and residents of Zonnelied – a centre for people with disabilities.
All of the attendees of the event were invited to explore different forms of self-expression, such as 'flocking' together like birds or battling one another in groups. The workshop encouraged guests to create new connections between each other, cutting through organisational hierarchies and cultural or social differences, using movement instead of words.

After a short break, the event relocated to the main auditorium in Bozar for an awards ceremony for the Evens Prizes and the launch of a new fellowships programme. The Stefan Zweig Fellowships initiative was introduced with a short speech from Raymond Georis, a long-standing friend of the foundation and leading European philanthropist, and a short talk by Monique Canto-Sperber, chair of the Foundation's Executive Committee.

Each of the laureates of the Evens Foundation Prizes, across Education, Journalism, Arts and Science, was introduced with a short video about their work and then invited onto the stage to collect the 'Loupe' – a specially designed award created by Corinne Evens and Goralska Joaillerie.

The awards were followed by a discussion on the future of Europe, with panellists Zdenka Badovinac, Director of the Museum of Contemporary Art in Zagreb; Lorenzo Marsili, philosopher, writer, and founder of transnational political NGO European Alternatives and cultural institution Fondaziona Studio Rizoma; and Johny Pitts, writer, photographer and journalist, the curator of the ENAR award-winning online journal Afropean.com and the author of Afropean: Notes From Black Europe. This wide-ranging and often passionate discussion covered politics, economics, colonialism and more, offering plenty of food for thought.

The day rounded out with a party featuring a rousing performance by the incredible Taraf de Caliu, whose infectious energy got people out on the dance floor to let loose after a long day of discussions and debates, and more music from DJ NiXie.

Thank you to the team at Bozar for making the day possible, to Andrea Salvadori for his management skills, and to all of the participants, filmmakers, photographers, team members and more who helped bring our vision for the event to life.